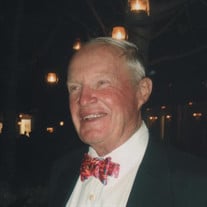 Graveside funeral services for William Turner "WT" Ray, Jr., age 86, of Monterey, Tennessee, were conducted on Friday, November 27, 2020, At 10:00 AM at the Whittaker Cemetery in Monterey. Rev. Christine Penner Officiated. Mr. Ray was born on May 28, 1934, in Monterey, Tennessee, to the late William Turner, Sr. and Lillian Pointer Ray. WT boarded the Glory Train and left this life on November 23, 2020. He was blessed to be at his home, Glenview, surrounded by loved ones. He was a graduate of Culver Military Academy and Yale University. He always cited the best education of all- both life in a small mountain town and world travel. He was truly larger than life and rose to meet any opportunity he came across. The list of life accomplishments is long: serving in the United States Army Airborne as a paratrooper, lifelong member of the Monterey United Methodist Church, president of Builder’s Supply Company, board member of One Bank of Tennessee, avid snow skier, biker, runner, and patron of University of Tennessee Football. He let it be known his greatest accomplishment was capturing the heart of his wife, Frances McClain Ray, and their nearly 50-year marriage. WT and Franny were a power couple before there was such a thing. They had friends in high places from Monterey to Aspen Mountain, and Nashville to Florence, Italy. Franny says, “He always had his go britches on” and was as likely to be seen at the Super Bowl as on Park Avenue or driving Highway 70 in his El Camino. They were known far and wide for their dinners and parties. WT’s wit coupled with Franny’s seamless willingness to hostess was legendary. WT always had the most fun and would sneak off to bed first, ready to roll again at first light. Quick with a joke, WT never met a stranger and would treat anyone who came through his door as family. He was able to talk his way in or out of any situation he found necessary or just fun. He was preceded in death by his parents, William Turner, Sr. and Lillian Ray; his brother, Jack Ray; and his nephew Jack Ray, Jr. Survivors include his wife, Franny; sister-in-law, Donna Ray; nieces, Elizabeth (Dr. Timothy) Fournet, Autumn Phillips, and Malone Cloitre; nephew, Nevett Steele; as well as great nephews, Ammon (Ashton) Hitchcock, William Hitchcock, John (Summer) Hitchcock; and great niece Phoenix Ray. In lieu of flowers, memorial contributions have been requested for the Monterey United Methodist Church, 124 North Holly Street, Monterey, Tennessee 38574, or Putnam County Family YMCA, 235 Raider Drive, Cookeville, Tennessee 38501. The family received friends at the Whittaker Cemetery for graveside services. Arrangements And Care Provided By D.M. Goff Funeral Home, Inc., 205 East Cleveland Avenue, Monterey, Tennessee 38574, Phone 931.839.2311.

The family of William Turner "WT" Ray, Jr. created this Life Tributes page to make it easy to share your memories.