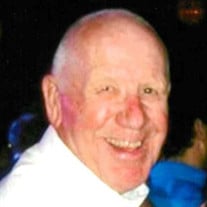 Funeral services for Robert “Bob” Schmidt, Age 87, of the Cumberland Cove Community of Monterey, Tennessee, were conducted on Thursday, November 4, 2021, at 4:00 PM from The Chapel Of Goff Funeral Home. Pastor Kevin Frieze Officiated. Interment was at a later date in Memory Gardens Cemetery in Arlington Heights, Illinois. Born: 2/7/1934; Passed Away: 11/2/2021 at his home in Monterey; Beloved husband to his high school sweetheart Marilyn (Brown) Schmidt for 69 years. Amazing, dedicated father to his three daughters, Vicki (Bill) Schult (deceased in 2017); Kathy (Rick) Lange; and Barbara Cinelli. Joyful and fun Pop to his 7 grandchildren: Amy & Ryan Schult; Clint (Alex) & Blaine (Jen) Reames; Jenilee Simpson; and Greg (Tina) & Drew Cinelli and 10 great grandchildren. Brother to George (Nancy) Schmidt (deceased); brother-in-law to Sandy Hart; and cousin to Susan (Terry) Wenta. Uncle, Good Friend and Coach to so many. Born in Chicago to George Schmidt (deceased) and Stella Leona Schmidt-Kennedy (deceased) on February 7, 1934. Spent his childhood years in Chicago and attended Evanston Township High School. Graduated with a Masters of Education from the University of Illinois in 1959. Bob had a passion for all sports and played both Football, Basketball, and Baseball as a young man. Robert was a Physical Education teacher and coached many sports including Football, Basketball, Baseball, and Tennis for Maine Township – Maine South and West High Schools. He retired after over 30 years from Maine South in 1993. He was inducted into the Illinois High School Football Coaches Association in 1995. Robert and Marilyn retired to Monterey, Tennessee in 2000 where they built a home nestled in the woods and mountains across from the Cumberland Cove Golf Course. Being avid golfers, they enjoyed being located next to a golf course and played in a golf league every summer through 2019. Bob and his wife volunteered for the Cumberland County Playhouse in Crossville, TN serving as house managers, group ushers, and delivered the programs to surrounding suburbs for 17 years. He & Marilyn attended Trinity Assembly in Algood, TN and Cumberland Fellowship in Crossville, TN. Bob had many sayings, yet his most favorite was: WWJD – What Would Jesus Do? Bob was widely known for his big grin and witty, sense of humor. He could always make you laugh. Everyone loved Pop, he was a caring, generous, and loving family man who will be sorely missed. The family requested in lieu of flowers, donations be made in Robert’s name to The Special Olympics or National Ovarian Cancer Coalition – Chicago Chapter. The family received friends at Goff Funeral Home on Thursday, November 4, 2021, from 2:00 PM until time of services at 4:00 PM. Arrangements And Care Provided By D.M. Goff Funeral Home, Inc., 205 East Cleveland Avenue, Monterey, Tennessee 38574, Phone 931.839.2311.

The family of Robert "Bob" Schmidt created this Life Tributes page to make it easy to share your memories.

Funeral services for Robert “Bob” Schmidt, Age 87, of the Cumberland...

Send flowers to the Schmidt family.