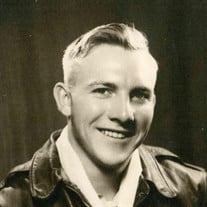 Marlyn R. Bonacker was born in Burt, Iowa on Jan 14th 1926 to Amos and Rose Bonacker, grew up there until the family moved to Oregon in the early 1940’s. He joined the Army Air Force in 1944 and served as a B-17 tail-gunner in England near the end of WWII. During a combat mission, his aircraft went down over Germany, and he was imprisoned and escaped. After WWII he continued his flying service including aerial mapping of Brazil and served as a crew chief on transport aircraft in Japan during the Korean War, in Texas and the Hawaiian Islands. He transferred into electronics and computers in 1960 and initially worked in airfield control equipment maintenance. He subsequently was a senior computer operations and maintenance NCO in critical missile launch and satellite operations for over a decade, where he was selected for promotion to Chief Master Sergeant, the highest enlisted rank. He culminated his 30+ year Air Force career as a squadron First Sergeant in 1975. After retiring from the Air Force, he and his wife Lea resided in Ft Myers, FL for over 30 years where he was active in professional, community and family activities. He relocated to Monterey, TN in 2011 and passed away on Dec 29th, 2021, at his home. He was preceded in death by Lea Vieria Bonacker, his wife of 62 years and “love of his life”, whom he met in Brazil. He is survived by his brother Gerald Bonacker, sister Judy Luckey, his daughters Lucia Chockley, Linda Hamel (Michael), Angela Huber Lienhardt (Tim), and his grandchildren, Steven and Brandon Chockley, Megan and Sean Hamel, Garren Huber, Chris and Jordan Lienhardt and four great grandchildren. Marlyn was a dedicated AF NCO, veteran and patriot, a loving husband and father, a dreamer and friend to all. Full of life, ever inquisitive and cheerful, a captivating storyteller, always ready to lend a hand – he impacted so many people in so many ways. He had a very blessed life and will be deeply missed by his family and friends. A “Celebration of His Life” will be held in early 2022; his interment alongside of Lea at Arlington National Cemetery is expected in early 2023.

Marlyn R. Bonacker was born in Burt, Iowa on Jan 14th 1926 to Amos and Rose Bonacker, grew up there until the family moved to Oregon in the early 1940&#8217;s. He joined the Army Air Force in 1944 and served as a B-17 tail-gunner in England... View Obituary & Service Information

The family of Marlyn R. Bonacker created this Life Tributes page to make it easy to share your memories.

Send flowers to the Bonacker family.