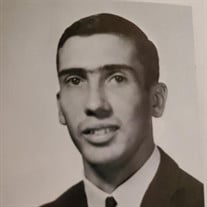 Graveside Memorial Services For Jimmy Paul Tucker, Age 72, Of Macon, Georgia, Were Conducted On Saturday, October 24, 2020, At 1:00 PM At The Welch Memorial Cemetery. Rev. David Cobb Officiated And Inurnment Followed With Full Military Honors Provided By The Veterans Honor Guard. Mr. Tucker Was Born On July 18, 1947, In Tucker Ridge, Tennessee, To Opal Asberry Tucker Of Monterey, Tennessee, And The Late Thurman Tucker. Mr. Tucker Passed Away On Wednesday, July 8, 2020. Mr. Tucker Was A 1967 Graduate Of Marion County High School. He Was Drafted Into The Army In 1968 And Served The Majority Of His Time In Germany Instead Of Being Sent To Vietnam Where Many Of His School Friends Were. When He Returned From The Military, He Joined His Dad Working In Highway Construction, Eventually Becoming A Master Blaster And Heavy Equipment Operator. He Retired In Macon, Georgia, Where He Met And Married Liz. He Always Enjoyed Being With His Family And Cousins. He Enjoyed Fast Cars, Was A Gifted Athlete In School And Enjoyed The Outdoors. He Attended New Season Worship Center In Dry Branch, Georgia. In Addition To His Mother, Opal Asberry Tucker; He Was Survived By His Children, Dana (Richie) Crouch, Bobby Stephen (Jayla) Wilson; Many Grandchildren, Great Grandchildren, Nieces And Nephews; And Sisters, Kay (Johnny) Turner, Barbara Riddle. In Addition To His Father, He Was Preceded In Death By His Wife, Shirley Elizabeth “Liz” Smith Tucker On September 25, 2020. The Family Received Friends At Welch Memorial Cemetery On Saturday, October 24, 2020, For Graveside Memorial Services. Arrangements And Care Provided By D.M. Goff Funeral Home, Inc., 205 East Cleveland Avenue, Monterey, Tennessee 38574, Phone 931.839.2311.

The family of Jimmy Paul Tucker created this Life Tributes page to make it easy to share your memories.

Send flowers to the Tucker family.