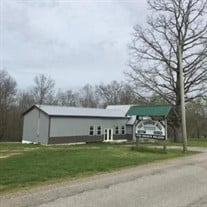 Funeral arrangements for Ernest David Mazelin, age 77, of the Muddy Pond Community of Monterey, Tennessee, were conducted on Tuesday, May 25, 2021, at 10:30 AM at the Church Of God In Christ Mennonite, 2704 Muddy Pond Road, Monterey, TN 38574. Interment followed in the Weeks Cemetery. Our dear husband, father, and grandfather, Ernest David Mazelin, was born in Berne, Indiana, on Thursday, December 2, 1943, to the late Franklin C. and Esther Schrock Mazelin. In the early morning hours of Friday, May 21, 2021, he peacefully fell asleep at his home. As he began his new day with Jesus, he was surrounded by family, who had lovingly cared for him. Dad was the fourth in a family of 7 children. In his early childhood years they, with a number of other families, moved to Lawrenceburg, Tennessee, then to Snyder County, Pennsylvania, where the group became what is known as the Hoover church. Dad moved with his parents and several other families to Monterey, Tennessee, in February of 1965, to form a new church in the Muddy Pond community. He found his lifelong companion in Rosemary Habegger. He returned to Pennsylvania to marry her on March 31, 1968, enjoing life together for over 53 years. They moved to a farm along Muddy Pond road shortly after they were married, and lived there until the present time. Their home was blessed with four sons and four daughters. Still seeking for truth, Dad and Mom found their church home and were baptized into the Church of God In Christ, Mennonite. He quietly embraced this faith to the end. One month after his baptism, Dad had a tractor accident which caused injuries that left him with lifelong pain and challenges. Life wasn't easy, but Dad wasn't a quitter. Farming around tree stumps in the early years, our parents worked hard to eke out a living. Dad loved to grow things and raised produce, which included cantaloupes and watermelons. Every fall our family processed sweet sorghum syrup. His small herd of cattle, always including a milk cow, was important to him. In later years his injuries began to hinder his mobility. We remember his endurance as he kept doing what he could, even when it hurt to move around. He would drive through the cane field hoeing from the side of his UTV. He enjoyed raising plants in his greenhouse; it was something he could do with his hands. He often asked the grandchildren to get him new legs, and now we are comforted to know that he has a new body. Dad was a man of few words, teaching us generosity and the Christian walk by example. Family devotions were important to him. His prayers often included the phrase, “We have no abiding city here.” He was concerned for the salvation of his family. As the children got married, each son and daughter-in-law was lovingly accepted. Grandchildren were special to him, and he loved to hear them sing. There were never too many children on the Rhino when he went to do chicken chores, or riding on the wagon to help pick cantaloupes. Those left with treasured memories are his wife, Rosemary; children, Roger and Linda, Paul and Karla, Sylvan and Liz, all of Monterey, TN, Janice and Darren Barkman of Stanton, IA, Michael and Kristann, and Marji and Lyle Wedel of Monterey, TN, Diane and Bryce Yost of Greensburg, KS, Josie and Alvin Peters of Cantril, IA; 38 grandchildren, 2 great grandchildren; 1 brother, Melvin and wife Janet; sisters, Emma Guenther, Rachel and husband Gene Nace, Doris and husband Irvin Hoover, Margaret and husband Crist Peachey; and 1 brother-in-law, Nelson Horst. In addition to his parents he was preceded in death by his sister, Eva Mae Horst; and brother-in-law, John Guenther. The family received friends at the Church Of God In Christ Mennonite, on Monday, May 24, 2021, from 2:00 PM until 4:00 PM and from 6:00 PM until 8:00 PM. Arrangements And Care Provided By D.M. Goff Funeral Home, Inc., 205 East Cleveland Avenue, Monterey, Tennessee 38574, Phone 931.839.2311.

Funeral arrangements for Ernest David Mazelin, age 77, of the Muddy Pond Community of Monterey, Tennessee, were conducted on Tuesday, May 25, 2021, at 10:30 AM at the Church Of God In Christ Mennonite, 2704 Muddy Pond Road, Monterey, TN 38574.... View Obituary & Service Information

The family of Ernest David Mazelin created this Life Tributes page to make it easy to share your memories.

Funeral arrangements for Ernest David Mazelin, age 77, of the...

Send flowers to the Mazelin family.